The latest unconfirmed update from Google, which has created tides of unease amongst webmasters came to be called as “Fred Update”, the name jokingly suggested by Gary Illyes, the webmaster analytics expert. And it’s the name we all have adopted and are of course, only going to be sticking with this one.

Google’s John Muller said, “ from our point of there was no update known as Fred.” John also added to his statement, “this name was given externally to a series of updates we’ve been doing over the time. We constantly try to bring changes in the search to bring more relevant and more high-quality content to users. ”

So, basically this latest so called “Fred Update” is yet to be officially confirmed by Google. But, even after consequences from the update has made its way far into the search marketing ecosystem.

In this post, we’ll be taking a quick glance at aspects like who were hit by this update, if it affected you, as well as the steps to take if your website or business is hit with the update.

The sites, which were having low-value content and were poorly configured were hit the hardest. The main focus of the update is to devalue websites which are having low-quality pages with the intention of only generating revenue without taking into account the value such pages offer to the users.

Websites which focused on prioritizing revenue over user experience were hit too. The majority of websites which were hit relied on practices which were either banned by Google or were in the shady gray hat SEO zone. The Fred update, allegedly, has led to a devastating impact on various websites which has resulted in the reduction of traffic by as much as 90 percent in the time span of just a few days.

The first sighting of Google Fred Update was on 8th March 2017. As the time goes on, the efficiency of the update will further increase and if the structural quality of your website is not good, expect a dropdown in terms of traffic upto 30-50% which can reach as high as 90%.

However, if your website is not over optimized and following the guidelines set up by Google, then expect increase in traffic just like our clients did. 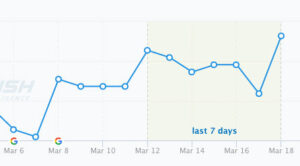 None of our clients suffered drop in rankings or decrease in traffic. On the contrary as the update goes on, our client websites are gaining positions for major keywords for which they were optimized in the Google search.

Some of the websites which suffered heavy drop in web traffic were from the below categories.

What to do if your website is hit with the update?

The best thing to do right now is to wait and watch. Make sure to not make any changes in a hurry which you will regret later on.  Few other tips which you can use to revert to original traffic are:

A great website built on the foundation of original content and earned links won’t be impacted by frequent Google updates. There are more than 100 Google ranking factors now and any one of the factor can impact the website traffic. Since Google is rolling out new updates consistently optimizing your website for all these factors is a wise choice. By sticking to the Google Webmaster guidelines you can also ensure that in future no update harms your website or even if your website gets affected somehow, then you can recover at a steady pace.

Google tweaks its algorithms daily, but not most of the updates are rolled out equally. Sometimes, these changes are minor tweaks and updates that are hard to get noticed by even the most eagle-eyed SEO. In short, Google Fred wasn’t just a single algo update, but rather it was just a series of more random changes made by Google within a short span earlier this year.

In short, be it an unconfirmed official update, or just a series of Google updates, it did help digital marketing community by improving elements that include only publishing top quality content, fixing user experience issues, avoiding over-saturation of online ads and addressing technical wide SEO problems.